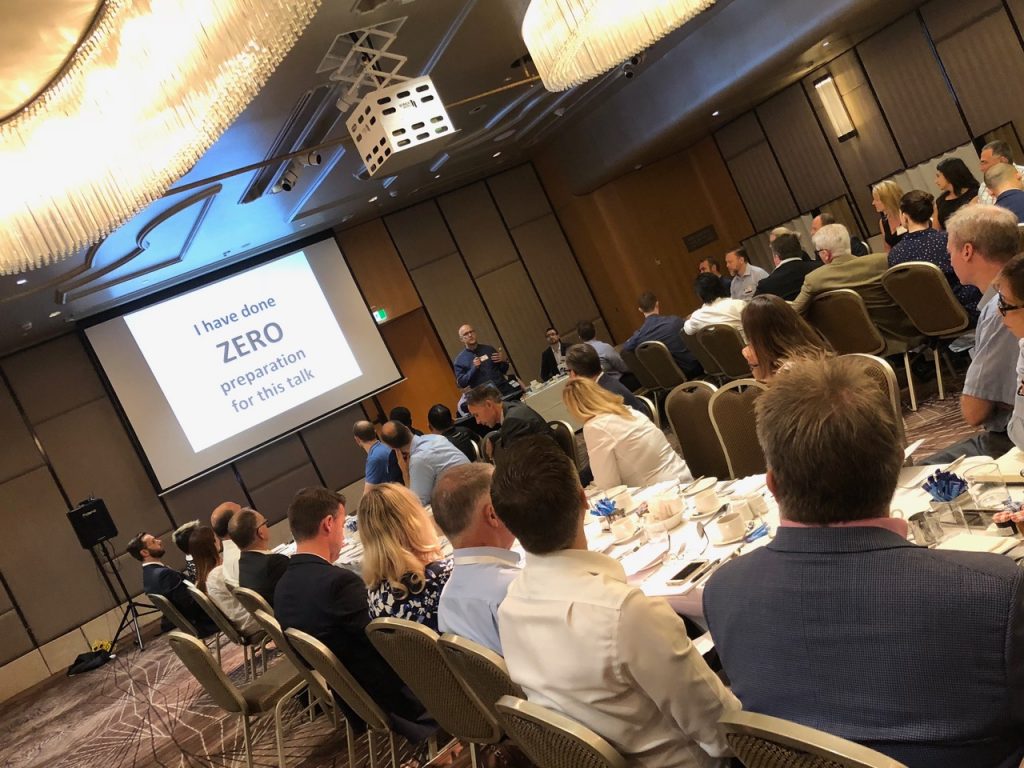 What happens when you do ZERO planning for your big presentation

Almost three years ago I did my first big presentation about my company in front of around 100 business people.

I was nervous as all hell, I had the shakes and even (someone told me afterwards) constantly tapped my foot throughout the entire 10 minutes.

Since then, I’ve done a lot of public speaking. Anything from a 30-second ‘pitch’ about my business to hour-long workshops on content creation, and I’ve become much more relaxed about it.

So last week I decided to mix it up a bit and do ZERO preparation for a five-minute talk on why you should be prepared before going into any business meeting.

It seemed like a good idea at the time.

OK, so there was some preparation. I typed ‘I have done ZERO preparation for this talk’ onto a slide and vaguely thought that demonstrating a lack of preparation would prove my point – that outcomes are poor if you don’t have a plan.

I was pretty sure that’d I’d think of some amusing things to say about dying on stage, don’t let that happen to you in a business sense, and I’d be done.

What I hadn’t banked on was confusion.

Normally, I plan these presentations so they have a natural flow; everything I say underlines the point I’m trying to make, all backed up by a couple of simple, clear PowerPoint slides.

Of course, I had none of that.

At this point, I should add that this was a breakfast meeting. So I was competing with people tucking into bacon and eggs, passing of a toast mountain across a table and catching the waiter’s eye for more below-average coffee.

My opening (and only) slide got a few laughs, some nervous, and then I was off. I explained that I had deliberately not planned anything and later on I would no doubt sit down and think, ‘I should have said this, not said that and there were lots of missed opportunities to get my message across. The same happens in a business meeting if you don’t have a plan, a message to get across and a desired outcome…’ etc.

However, I soon lost my way.

Not that I had a ‘way’ to lose, as such, but I caught someone’s eye who had a real look of confusion on her face as she glanced between me and the slide. It was almost like a soap opera actor who’s been asked to do their best confused face. That bad.

I felt I needed to win her back, even though she was clearly in the minority. So, I re-explained what I was doing, which lost me any kind of flow that I had. I repeated bits I’d already said and briefly lost the point I was trying to make in the first place.

Miss Confused looked less confused, replaced by large chunks of the audience who were now really confused and looking a little uncomfortable. Most people don’t like to see someone die on stage, after all.

In the end, I just about pulled it around. A few jokes at my own expense and the message came across. Kind of. I sat down and did indeed think, ‘I wish I’d said this, and not said that.’

Rewind to May 2015. Just before my first big presentation, I Googled ‘public speaking tips’ to get some help. Advice ranged from taking a deep breath and not talking too quickly (great), bullet points are better than a rigid script (a yes from me) to the old chestnut about imagining everyone in their underpants (useless).

Some of those sorts of tips will work for you, some won’t – but the one thing that works for everyone is being well prepared.

Know exactly what message you want to get across and keep it simple. Think about your audience and what will resonate with them. Don’t lose them with endless text-heavy slides (aka ‘death by PowerPoint’) – and practise, practise, practise.

Tick all those boxes and your presentation will go well. I have ZERO doubt about that.